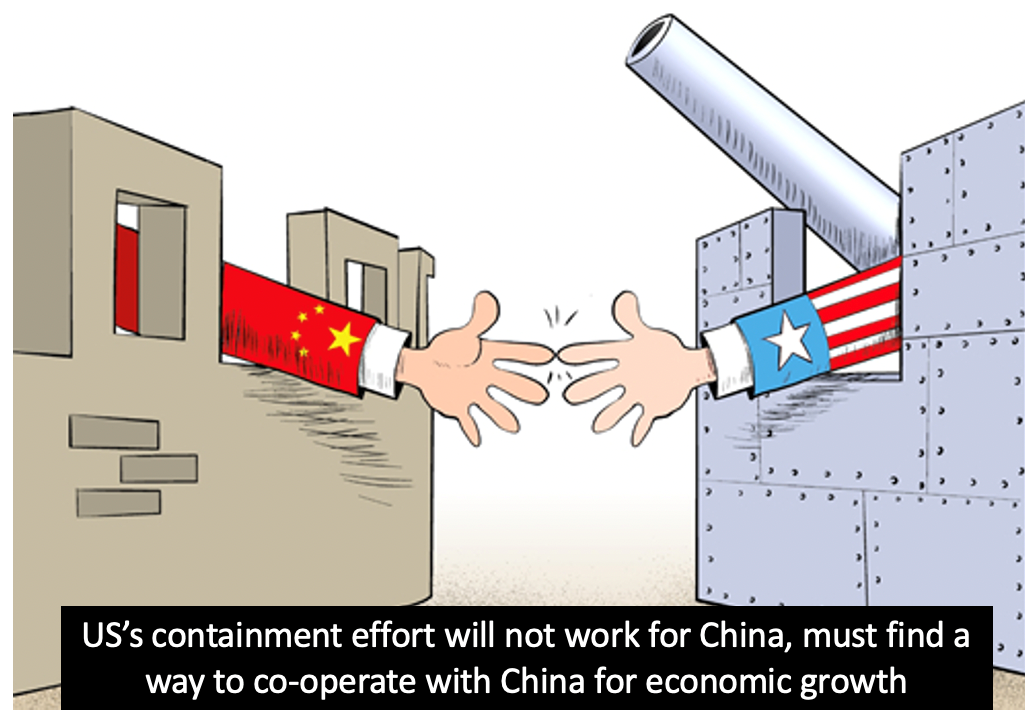 Feb 23, 2021 (China Knowledge) - One biggest question facing the new Biden administration is on how should the US respond to a rising China?  Many Americans would argue that a partial form of containment is feasible, which Biden and his predecessor’s administration could agree on as a common enemy may unify a divided country. However, is containment feasible? Looking back human history and evolution, the answer is a definite ‘No’.

Firstly, China is not a military adversary as compared to Soviet Union. China aims to be economical wealthy, a more dynamic technology sector, a well-fed large population, a cohesive form of civil policies. Its military defense is solely in the interests of China’s economic development and territorial sovereignty. China’s thousands of year in history has never been an invader; on the contrary, during its prosperous years the Middle Kingdom over many dynasties were donors and givers to neighboring countries.

Secondly, the Chinese economy has now become highly internationally integrated. This could often be viewed as a double-edged sword due to its vulnerability for China, but it is also a source of influence. Most countries want to maintain good relations with both the U.S and China, and many are not willing to choose the US over China, which Americans often view every relationship as one-sided affairs, always demanding a clear winner instead of peaceful win-win mindset.

The third point, though there are a plethora of simple arguments on this proposition of China’s peace rise, that over the last four years the US has exhausted its remaining goodwill and reputation for good sense, decency, reliability and democratic norms. The world cannot unwind the recent Trump presidency, especially at its disgraceful end as it challenges the basic democratic principles in a presidential election. To top it off, the portion of Trump supporters are evidently still around and ready to back him for presidency in future. The U.S is used to holding China accountable for major economic mishaps or put it bluntly disasters but after significant events like the global financial crisis and Trump’s presidency.

In quick summary, fortunately the U.S-China relations will not result a Cold War like with Soviet Union due to the fact that military conflicts in current time and technologies has one only ending – end of human civilization. Competition between them is inevitable but there must also be deep co-operation as China is an emerging market with an enormous population (market). The U.S must work to restore its basic humanity and multilateral interests, and not creating a hostile and military aggression like our past generations had experienced in two world wars.

China isn’t a rising power it is merely back on track to be economic powerhouse like we had seen in the last two thousands of years. Just a reminder that the Song dynasty from 10th to 14th produced some 70% of global GDP. Maybe the doctrine of ‘what goes up must come down’ aptly describes a rising China, and the slowing U.S.